Lights, Camera, Mazel Tov
How I Officiated a Wedding on MTV 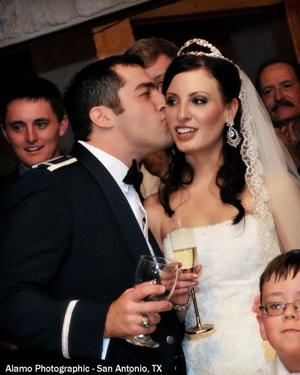 As one of the only rabbis in the South who will officiate interfaith weddings without conditions, I get quite a few calls from brides, grooms, and parents looking for a rabbi. When it came to Yisel and Max’s San Antonio, Texas wedding, it was the first time that the call came from a television producer! I was definitely intrigued. After all (as a child of the 80s, especially), I never really thought that MTV would come calling!

The producer explained to me that MTV’s Hispanic channel was about to roll out a new reality TV series, “Quiero Mi Boda”, roughly translated, “I Want My Wedding”, which would go behind the scenes of weddings, and would be a spin-off of their very successful show “Quiero Mis Quinces” that did the same for the traditional coming of age parties for young Latinas. They were exclusively focusing on intercultural relationships, where one partner was Hispanic, and one of the central couples was a Jewish-Catholic couple, who were to be married in exactly nine days. Their rabbi had pulled out at the last minute. It was very important to the couple to have a rabbi officiate their wedding, and it was important to them to be part of the series. If they couldn’t find a rabbi and quickly, they would be faced with a tough choice – give up on having a rabbi or themselves pull out of the series. Would I be willing to help?

My mission as an interfaith wedding rabbi is to help interfaith couples make the most of their most wonderful day. My belief is that interfaith relationships should be celebrated, and that the ceremony can and should be the focal point of this celebration of an interfaith couple beginning their new life together. I immediately said yes, as I wanted to help this couple who were in personal dire straits. I also felt it important to help them in their quest to utilize their wedding as a teachable moment for people in the Hispanic and general community. This was a golden opportunity for MTV viewers to see what a Jewish wedding was all about, and how interfaith relationships are something a rabbi is passionate about celebrating.

I usually try to meet (or with couples who don’t live in Dallas, have phone conferences) with each couple three or four times before their wedding, so we can really get to know each other, and plan the ceremony together. Obviously nine days did not allow for that. Yisel, Max and I had to make do with one or two intensive phone conferences. That said, we were ready to go a few days before the wedding.

The MTV people were very respectful and seemed genuinely fascinated by all of the traditions included in the ceremony. It was very important to them that we include all of the authentic traditions for the television audience at home to see. I was personally fascinated by the whole production. In addition to the vendors you always see at a wedding, there were camera crews and “sound guys” hovering throughout the proceedings. Part of the time they just filmed what was going on, and part of the time they interviewed people. As befits our somewhat litigious society, production assistants would quickly descend on anyone who participated, and have them sign a lengthy waiver.

The military wedding was exciting and beautiful with the groom, a U.S. Air Force pilot, clad in his dress uniform, and the bride, wearing a beautiful tiara veil in addition to her wedding gown. The ceremony included elements from both faith traditions, with vows, a New Testament reading, and a Unity Candle from the Christian tradition, and the Ketubah, the Seven Blessings and the breaking of the glass from the Jewish tradition. My favorite parts of any wedding ceremony, and this was no exception, are the traditions that both faiths share, the ring exchange, the shared cup and the Priestly Blessing. For the latter I wrapped the couple in my Tallit, which always makes for a “warm and fuzzy” moment, and I blessed them in three languages, Hebrew, English and Spanish. I then pronounced them esposo y esposa. As I usually do, I included short explanations of all the various customs and rituals for the benefit of those at the wedding, and those who would watch it on TV.

I always begin the last part of the ceremony by mentioning that when people in our Great State of Texas hear that I do weddings, they say to me “Y’all break a glass, right?” Many times it is the only thing they know about a Jewish wedding. You would think, therefore that we would know the reason why we break a glass, and as typical of our People, there are about fifteen-twenty reasons for this ritual, which really means none are true... I then say, that following extensive Talmudic research, I have found the real reason – this is to symbolize that this is the last time a Jewish husband will be able to put his foot down! This always elicits a hearty laugh, and it did this time too. I then usually follow this with a serious explanation, one that speaks to the couple and their hopes and dreams.

It was especially important to me and to Yisel and Max to use what I feel is the most wonderful explanation for the breaking of the glass; one that fits very well with the positive message that they, I and MTV were trying to convey regarding interfaith and intercultural relationships. The shattering of the glass, I explained, symbolizes the breaking down of barriers between people of different cultures and different faiths. We look to the bride and the groom and hope that the day will come when everyone in the whole world will learn from them, and love each other, regardless of faith and culture. I certainly hope that with the airing of this beautiful wedding on MTV, we will bring that day just a little closer!