A Quaker Jewish Wedding
in the New Orleans Garden District 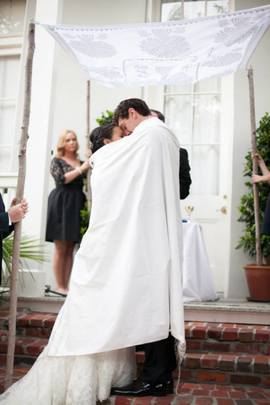 Lauren and Yoni are wrapped in my tallit (prayer shawl) to receive the Priestly Blessing
If a city could talk, you just know New Orleans would have so much to say. So, whenever a couple asks me to officiate their wedding in New Orleans, I am excited. Lauren and Yoni, who love their adopted hometown, decided to marry in an old home in the Garden District, Terrell House, and to give their wedding a real New Orleans flavor. Golden leather yarmulkes, anyone?

Lauren's parents sent her to a Quaker school, and she fell in love with their teachings and values. Yoni had grown up with a strong Jewish identity, punctuated with a strong attachment to Israel. They decided to have a Quaker-Jewish wedding. I love officiating weddings in general, but weddings that enable me to learn about new traditions I am not familiar with, are a special treat.

Quakers or Friends believe that ministry does not rest in a cleric, but in each individual. They hold that the Light of God is present in each person, and that if one waits silently, God may speak to the individual in his or her heart. Therefore, the central sacrament of Friends, is the Meeting, which begins with and is punctuated by listening to one's heart and to each other in silence.

It is this Light that can lead the individual to various callings, referred to as Openings or Leadings. The Meeting is a forum for Friends to listen to these, contemplate them, accept them for the community at large, or hold off on accepting them as a community. Even in the latter case, the community supports the individual in adhering to the voice he or she heard.

As would logically flow from these ideas, the Quakers do not believe the Bible is God's final word. Rather they believe that the words are agents to receive God's spirit. Interestingly, this outlook is somewhat similar to the outlook of today's religious non-Orthodox Jewish movements.[1]

A Quaker wedding is not officiated by a cleric, rather takes place under the care of Friends (represented by a special Care Committee) as they gather in Meeting. It begins, as all Meetings do, in silence. The couple rises when they choose, state their vows, sign a certificate that reflects these vows and read it aloud. The Meeting then proceeds with others spontaneously offering thoughts and prayers. It is concluded when members the Care Committee close it by shaking hands, with all present doing the same. Then all present sign the certificate.[2]

For their wedding, Lauren and Yoni wanted to include the traditional Quaker vows and wedding certificate. From the Jewish tradition, they wanted to include the ring exchange, which is the essence of the Jewish wedding ceremony, and the Seven Blessings, which are central to it. For the latter they chose to compile their own contemporary version to be read in English, interspersed with my chanting the traditional Hebrew blessings. The English was replete with the idea of Tikkun Olam, mending the world, an idea central to the social justice traditions of Quakers and Jews. Of course, if you are already in New Orleans, you have to make some noise to signal the party should get started, so, of course, the breaking of the glass could not be forgotten.

I always include explanations, so everyone will understand everything, and feel welcome and validated.  When I sat down to write Lauren and Yoni's ceremony, I decided that it would make sense to highlight some fascinating wedding ceremony commonalities, as well as philosophical points of view shared by Jews and Friends.

I began the ceremony, as I often do, talking about how the couple prays that the closeness and community of those present will sustain them now and in the future. This idea is universal, but particularly representative of the Quaker idea, that the process of marriage is an ongoing one, and that the Care Committee and the Meeting at large has a continuing role in supporting the couple.

In most weddings in America the ceremony ends with the officiant pronouncing the bride and groom as married. However, both Jews and Friends share the idea that it is not the actions of the officiant that causes the couple to be married, rather it is the couple's actions, affirmed by all witnesses present. Therefore, I pronounced the couple with language that emphasized just that.

I then spoke about how both in Judaism and in the Quaker faith, a marriage is validated by a marriage certificate or agreement. In Judaism it is signed by two witnesses, while in the Quaker faith it is signed by all present, who through this act further validate the marriage. I invited all of the guests to follow the bride, groom and their families in signing the wedding certificate, after the ceremony.

I chose to talk about how Lauren and Yoni embody the teachings of the great Quaker educator, Parker Palmer, specifically having an open heart. An open heart, says Palmer, causes us and calls us to learn a new set of habits of the heart. It calls us to be fully open, fully engaged, fully invested in the world.

Now, Palmer reminds us that the heart, to the ancients, symbolized not just emotion, but wisdom too. So, having an open heart means being joyously open to new experiences that bring with them new learning, and supporting each other in the learning process.

Palmer reminds us further, that having an open heart means that we quietly listen to what Quakers call the Inner Light, and Jewish mystics call the Sparks of Light that inhabit us and the rest of creation. When we quietly listen, we become kinder, more loving and more accepting of others. Can there be a better message at an interfaith wedding in a multicultural city?

I ended my personal remarks thanking Lauren and Yoni for inspiring us, in these words, which we Jews, Quakers, and everyone else can and should identify with, "May you continue to serve for your friends as a true example of how to live a full and joyous life, through true open hearted engagement with the world and all who inhabit it, with the acceptance, kindness and love, that come from a truly open heart."

[1] Facts About Friends by Ted Hoare, retrieved November 15, 2013, from http://www.quaker.org/friends.html

[2] Marriage Care Committee Guidebook for Sandy Spring Monthly Meeting of the Religious Society of Friends, retrieved November 15, 2013, from http://sandyspring.org/?post_type=document&p=166 (Update April 5, 2018: This link does not seem to work anymore. Similar information may be found in other Society of Friends’ resources.)