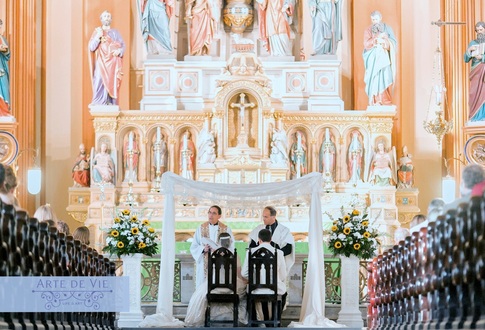 In August 2015, I co-officiated Ellen and Nate's wedding with Father Richard Thibodeau in the sanctuary of the St. Mary's Assumption Church in New Orleans, Louisiana. This is the oldest place I have ever officiated a wedding. The building goes all the way back to 1858! Like most old buildings, especially in Hurricane plagued New Orleans, it has seen many renovations and additions, but most of it is original.

The church was built for German immigrants, and the building was designed like a German church to make them feel at home. By far the most impressive aspect is the wooden hand-carved statuary brought across the ocean from Germany in numerous crates, when the church was built.

Now, if you are saying to yourself that Catholic Churches always have icons and statues, the number alone of these statues puts any other Catholic Church to shame, to say nothing for the intricate detail of each one. The most fascinating to me were the five statues under the upper altar. Going from left to right you see Moses, Aaron, Malkitzedek, David and Malachi.

Moses has horns, due to a translation error of the word קרן, pronounced karan, glowed, as קרן, pronounced keren, horn. Even if you can't read Hebrew you can see that the word looks the same. Ancient and modern Hebrew readers understood how to properly read it due to context, while it confused many Medieval Christian artists.

Aaron is wearing his high priest vestments. I usually bless couples with the Priestly Blessing, with an intro that goes something like this: "The most ancient copy of scripture archeologists have found is the Priestly Blessing. This blessing is common in both the Jewish and Christian traditions. Our forefathers, the authors of the Torah, imagined the first high priest, Aaron, brother of Moses, blessing the Children of Israel with these very words. To this day Jews attach a special mythical quality to this blessing, when it is recited by someone like me who is descended from that ancient Israelite priesthood. Ellen and Nate, as I wrap you in my tallit and Father Richard wraps you in his stole, we bless you with the words of my great ancestor." This time I pointed out to the assembled that they could see Aaron right behind me! That was extra special.

Malkitzedek is holding bread and wine. He shows up in one of the oddest and probably latest written chapters of the Torah. Everything about this chapter from its language to its character to its settings and more, are so distinct, that scholars are confident that its author is unique, and not J, E, P or any other minor scriptural author.

As Abraham returns from battle he is greeted by Malkitzedek, who is both king of Salem, and priest of El Elyon. The Judeo-Christian tradition identifies El Elyon, as God, Most High, the Judeo-Christian God. However, an unbiased reading would seem to imply that it refers to El, the head of the Canaanite god family, who by virtue of that position is most high. Malkitzedek brings out bread and wine, for the returning warriors, and Abraham gives him a tithe of the spoils. Arguably, he literally takes "center stage" in the church, because of this.

The rabbis of old, who abhorred leaving figures anonymous or nearly so, identify him with Shem, son of Noah. If you take the Bible at its word, re the preposterously long lives of the ancients (which the rabbis did), and do the math (which the rabbis did), Shem is still alive at that time. Shem figures into other interesting settings in the rabbinic tradition. The rabbis imagine him running a Talmudic academy, for instance.

Shem/Malkitzedek, specifically as a priest, shows up in the rabbinic imagination, in one more fascinating story. Tamar, Judah's daughter in law, is tied to Judah's son, Shelah, through levirate marriage rights. (The widow of a childless father must marry his brother.) Having lost two other sons she married, for which Judah implicitly blames her, even when Shelah grows up, Judah just leaves her hanging. She, tired of her limbo situation, disguises herself as a prostitute, and waits for the recently widowed Judah by the side of the road. Judah takes the bait, but alas he has no money. So, he leaves his seal, staff and fringes with her, so he can come back with payment later. Of course, later when he sends his close friend to pay the harlot by the road, nobody knows who or what he is talking about. Three months later, the townspeople report to Judah that Tamar has gotten pregnant, the whore (their words, NOT mine)! Judah instructs that she be burned. Why burned? Because, as the rabbis remind us, (P tells us much later in the Torah), that this is the penalty for a whorish daughter of a... priest. Now, which priest could she be descended of? Aaron has not even being born yet! Malkitzedek, of course.

Once Tamar brings out Judah's stuff, he rescinds the death warrant, and she happily gives birth to David's ancestor. So, Malkitzedek is a forbear of the Messiah too, which ties everything up in a nice little bow.

I doubt the church had this rabbinic tradition in mind, but fittingly the next figure is David. He is holding a harp, of course, and his centrality, as father of the messianic line needs little elaboration. Interestingly, though, he is probably the only figure of the five for whom we have actual archeological evidence that he existed. An inscription in Tel Dan in Northern Israel tells a variant of the biblical story of the slaying of Achaziah, King of Judah, and refers to him as being from the House of David. This puts to lie the minimalist theories that the entire story of the Deuteronimistic History (Deuteronomy through Kings) was made up hundreds of years after the destruction of the Judahite kingdom.

Malachi, who is decidedly the most minor figure of the five, shows up on the altar as he is the last of the Hebrew prophets. He holds a scroll, unfurled in his hands. In his final words in the Bible he predicts the return of Elijah on the eve of the "great and awesome day". Jews and Christians interpret this day as the day of the messiah shall arrive. According to Malachi, on the eve of that day, Elijah will reconcile and unify the hearts of fathers and sons. Perhaps we can read some of our own modern symbolism into this, as in August 2015, the clergy of the mother religion and the daughter religion came together to bless Ellen and Nate in the very shadow of Malachi.